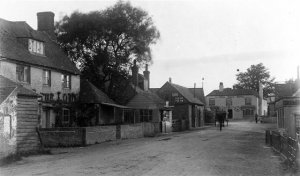 Herstmonceux village was historically known as Gardner Street (possibly from Garner Street which would have been the street of granaries but this is conjecture). The village name was adopted from the name of the nearby castle where, apparently, in the 12th century a Saxon lady by the name of Idonea de Herst married a Norman nobleman called Ingelram de Monceux, to give the place it's name. 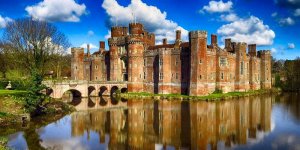 Herstmonceux is renowned for its magnificent moated castle, a Grade II Listed Building set in beautiful parkland and superb Elizabethan gardens. Built originally as a country home in the mid- 15th - century, Herstmonceux Castle embodies the history of Medieval England and the romance of Renaissance Europe.

Herstmonceux was a significant place long before the Castle was built. There is evidence of Roman remains, and in the 12th century a saxon lady, Idonea de Herst married a Norman nobleman, Ingelram de Monceux, to give the place it's name. The name of the owners changed through marriage to Fiennes, and the family increased in wealth and power. James Fiennes distinguished himself fighting for King Henry V at the Battle of Agincourt and later became sheriff of Surrey and Sussex.

It had deteriorated into a ruin until 1911 when it was bought by Lt. Col. Claude Lowther who used local craftsmen to carry out the building work, and by 1912 most of the south front was rebuilt. After Col Lowther's death in 1929, Sir Paul Latham contributed very greatly to the construction of the castle both internally and externally. In 1946 he sold it to the Admiralty who bought the estate for the Royal Greenwich Observatory, and it became an important scientific institution for the next 40 years.

The Isaac Newton Telescope started operations in Herstmonceux, United Kingdom, in 1967, but after a number of years it became clear that better astronomical weather conditions would benefit the astronomical use of the telescope. Such conditions are found on the Roque de Los Muchachos Observatory and therefore it was decided to move the telescope to La Palma, where it resumed operations in 1984.

The Observatory Science Centre, the former home of The Royal Greenwich Observatory, is located within the grounds of Herstmonceux Castle, investing in this historic site, supporting the maintainance of the Castle and expanding the learning opportunities presented.

The Centre is an interactive hands-on science centre which has been operating since 1995 offering a unique science learning experience among the domes and telescopes of a world famous observatory. 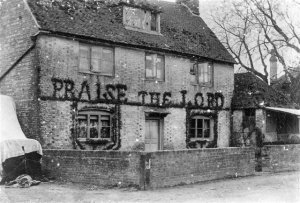 Gardner Street once sported the very recognisable Praise the Lord cottage. Recognisable because of the amazing cotoneaster creeper which grew up the front of the cottage, which the owners had carefully and very skilfully clipped into the words 'PRAISE THE LORD'

'Big Jim' Crouch bought the house in Herstmonceux with this extraordinary creeper in about 1957. The previous owners had planted the cotoneaster and clipped it into the shape of Praise the Lord in protest at the building opposite being turned into a public house the current Brewer's Arms. The family were extremely anti-alcohol and took great exception to a public house being opened opposite their cottage.

Big Jim decided that the shrub, which had actually died, had to come down; so down it came within six months of the family moving in. The cottage was then re-named Cotoneaster Cottage after its one-time famous shrub. When Big Jim cut the creeper down, the granddaughter of the previous owners found out and put a curse on him - the Curse of the Cotoneaster. This didn't seem to bother Big Jim overmuch, and the Crouch family lived in the cottage until about 1984 and subsequently Young Jim continued living there for a number of years.

Cotoneaster Cottage still stands today but has been re-named Winslow House. In its time it has been a bakery and tea rooms, an estate agent's and a home interiors shop. 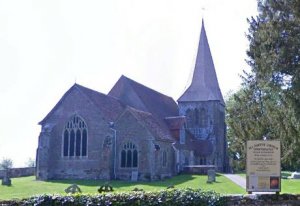 All Saints Church is situated about two miles east of Herstmonceux village centre, and is approached from the north down Chapel and Church Road through Flowers Green.

All Saints stands on a gentle slope that looks south and west for miles across the Pevensey levels. The church, most of it, preceded the castle by well over a hundred years. The oldest parts are the 12th century west tower (perhaps the only Sussex church tower which forms part of the west end of the nave) and the west wall of the nave. The rest of the church consists of a 13th/14th century nave, chancel, and north and south aisles with a 15th century north chapel of red Flemish bricks added by the builders of the Castle. On 3 July 1944 a German bomb demolished three windows and damaged ten more, the roof and the shingles of the spire. 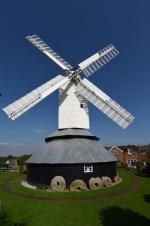 The Windmill at Windmill Hill

Windmill Hill was so named as early as 1527 which suggests that there was a windmill here in the early 16th century. The earliest surviving map on which a windmill appears in Herstmonceux is from 1783; that mill stood on the north side of the lane leading from Flowers Green to Golden Cross. There are also records of mills on other sites in the late 1700s and early 1800s.

An entry in the Sussex Weekly Advertiser of 20th January 1823 reads - 'To Millers and others. To be sold by auction by Thomas and Son, on Thursday 13th Feb. 1823, at the Woolpack Inn at Gardner Street. A large well-built Post Windmill, in good repair, with a good Trade of Business to the same…. Situate at Herstmonceux, adjoining the Lewes Turnpike road. The mill was built in 1814….late in the occupation of Mr. Richard Pocock, Deceased'.

In 1832 Edward Beeny is reported as being the owner of the mill. The Beeny family were associated with the mill until 1872 and their family name can still be seen carved into the mill's interior woodwork. The Hammond brothers owned the mill at the end of the 19th century and Charles Hammond's new sweep governor was installed to control the shutters and sweeps. By the 1890s the mill's upper structure had become unsound and so, in 1893 the sweeps were taken down and milling continued using a steam engine until about 1913.

The windmill was allowed to decay through the 20th century. Remarkably surviving the hurricane of 1987, it was not until 1993 that new owners Paul and Bee Frost started work to halt its decline. 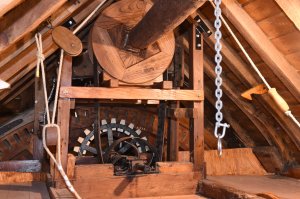 In 1996 the Windmill Hill Windmill Trust was formed with the aim of restoring and maintaining the mill — starting with fund-raising. In 1997 the Heritage Lottery Fund agreed an award subject to a fully costed proposal. In 1999 scaffolding went up to protect the mill. An assessment of the mill's condition was made in 2000 and was far from encouraging. The mill had to be completely dismantled if it was to be fully restored. But there was good news in December 2001 when the Heritage Lottery Fund awarded a grant of over £570,000 towards the project.

The WHWT raised the additional funding of £200,000 and finally in 2003 the restoration work began. Over the next three years every part of the mill was repaired or re-made and refitted — and the windmill opened to the public in 2006. More recently a second grant was awarded to restore the milling machinery and this was completed in 2016.

The restoration of the windmill at Windmill Hill has been a real community project and the WHWT trustees want the windmill to continue to make a real contribution to local life. Volunteers are always needed and the windmill welcomes local people and local schools, clubs, societies and groups as visitors.

'The windmill is open to the public every Sunday and Bank Holiday Monday from Easter to August, and on the first and third Sundays of September and October.'

About 1908 the Baron de Roemer installed his first electricity generating plant, The Steam House, in Lime Park, Church Road. By 1911 an underground DC supply had been established to the Woolpack public house, shops and houses in the village together with some street lighting. A battery storage facility was also added. In 1913, electric cooking demonstrations were held in the village hall. The system was very advanced for its day and age. Generation continued up until 1932 when the Weald Supply Company took over.

It appears that the electricity generating industry grew so rapidly that few early examples survive. In 1995, English Heritage commissioned a Monument Protection Programme (MPP) in order to identify and preserve fast disappearing evidence of the development of this industry. By 1998, the MPP had concluded that there were no complete installations that represented private rural supply. Finally, that there were no extant buildings. According to the Department of Culture Media and Sport, the Steam House may be the only surviving example of a small privately owned public supply system.